An everlasting impression is borne of fiery imagination, sheer determination and the legend of legacy. Only a King could have realised this fantasy in 19th century India. 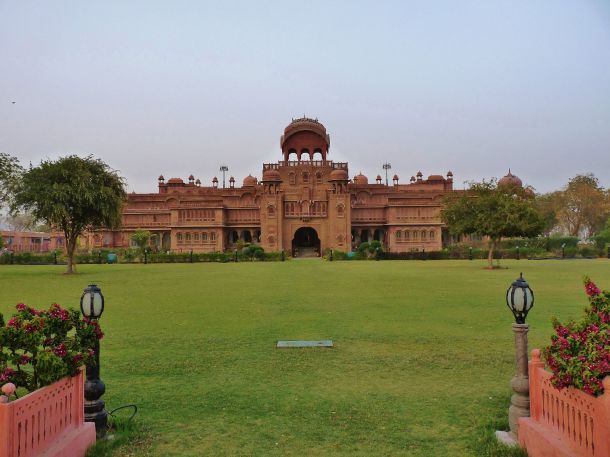 The legacy of tradition stands proud. Laxmi Niwas Palace, the Bikaneri Royal residence, is a work of art.

Catching glimpse of the fairytale pink sandstone palace sets my heart aflutter. As my car drives up, the grand principal entrance is stamped by a soaring Clock Tower. It’s not just antique, it’s ancient and boasts a superior presence. The hands of the clock tower don’t move, but passing it spins back the hands of time.

I’m led through a time-warp as a magical secret garden appears where peacocks roam and spring flowers perfume the lawns, dotted with lily ponds and fountains. The faded glory of the monumental palace gradually appears, resplendid, as I’m chauffeured along the driveway. As I step out, I step straight back into a piece of history…

Gazing all around in amazement, my head fills with readings. What were mere words in a book now jump to life before me, surrounding me, stirring my imagination and fuelling the fire of my senses. The palace dates back to 1902 and is steeped in refined history and embalmed in grandeur. Home to the then King of Bikaner, Maharaja Ganga SinghJi, who enjoyed playing host, the palace has regaled the likes of King George V & Queen Mary (as Prince & Princess of Wales in 1905), the king of Greece, the Prince of Wales (later king Edward VIII in 1921) Viceroys, Maharajas and renowned statesmen.

I can hear their footsteps in the marble courtyards, their laughter resounding down collonaded corridors, the clink of glasses upon canopied balconies and the echoes of classical Indian instruments filling the whispering hallways from the historical ballroom. As I look around, I imagine a Palace embellished in precious ornaments; an Aladdins-cave of ritz, filled with the glamorous upper echelons of the then-society. However, today; no-one. Not a soul in sight. When I ask about other guests, I’m informed that I am the Princess today with the entire palace to myself, as I’m the only guest for the next 24 hours. 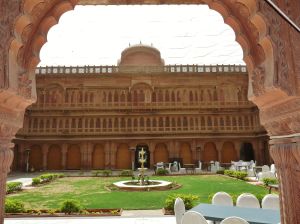 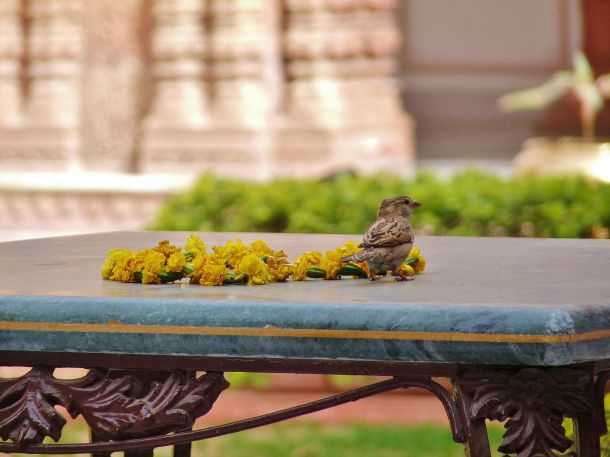 A little bird enjoys the scent of the fresh flower garland, prepared to worship Hindu Gods at Laxmi Niwas Palace

Pinching myself, I’m escorted to my room, the Maharani (Queen’s) suite, in it’s original design and furnishings. Looking around, I realise the value of timelessness. Timeless quality never fades nor feints. Rather, it matures in exclusivity and ravishes in excellence.

I drop my bags, quite literally, and head into the courtyard for a wander.

The palace was named after the Hindu Goddess of wealth and prosperity named ‘Laxmi,’ with ‘Niwas’ meaning palace. Quite apt, I can’t help but feel, as I marvel at it’s ornate elegant splendour. The royal residence opened it’s door partially to guests, as a luxury heritage hotel, at the turn of the 20th century.

Behind Laxmi Niwas is another palace, within the same grounds. That is still the home of the current Princess. I’m encouraged to wander and explore the grounds outside and around it. 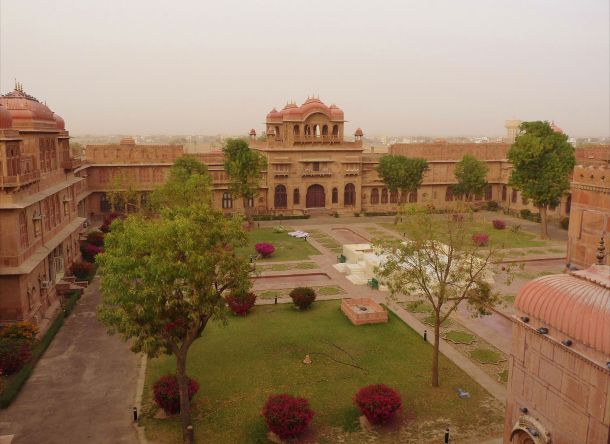 Overlooking the Princess’ home within the grounds of Laxmi Niwas Palace

I peruse the rooms dotted around a beautiful central courtyard, all designed in Mughal architecture. The intricacy of the sandstone work is awe-inspiring and made more jaw-dropping as I learn it is has all been crafted by the bare hands of Bikaneri artists. Painted in intricate filigree and lattice work, adorned in frescoes and murals in gold and lacquer, there is tragedy to this faurytale. Many craftsmen, who’s job it was to carve sandstone, eventually lost their eyes to the trade. The design is so intricate that they couldn’t see if they wore goggles, so fragments of sandstone eventually chipped away the surface of their eyes, damaging their retinas and blinding them. For this reason, the next generation has moved away from this craft, which is now a rapidly dying art; one of several in India, I’m told.

Browsing the empty libraries and drawing rooms, I come across a rather frightening room. It’s now the Bar and Billiards room but is the pride of the King’s taxidermy. It’s horrifically covered in wild Tigers, Lions and endangered animals of world jungles. I’m both fascinated and sickened as I read the accompanying plaques of each, naming and dating the group and location of the hunt. 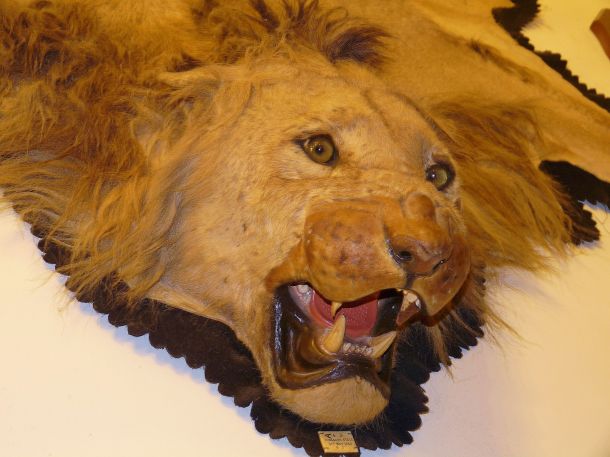 One example of the taxidermy on display in ‘bar and billiards room’ at Laxmi Niwas Palace hotel, Bikaner

As I ask the barman questions, I’m quickly joined by another member of staff. He’s been notified of my interest in learning about the history of the palace and it’s residents and escorts me on a private guided tour.

ONLY GIRL IN THE WORLD

We begin by heading up a narrow set of stairs to the first floor. The eeriness of the dimly-lit empty corridors become more real here. I’m shown a secret lift. It’s more than a century old and was a gift form the English. Still in perfect working order, the metal gate is first drawn and I’m seated on a velvet mahogany throne as we ascend. I’m struck by a sense of unease at what’s to come.

At the top, I’m greeted by the most magnificent view. 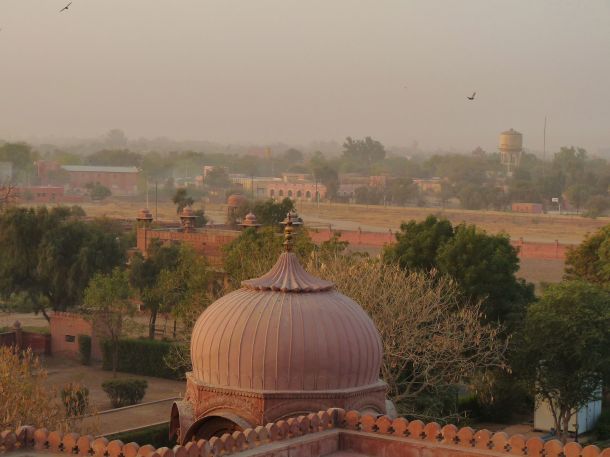 The palace rooftop is designed in elaborate and elegant ‘Chhatris’. Literally translated that means umbrellas or covers. But I refer to the palace domes, spires and turrets. They’re the same blush sandstone colour of the palace. And at sunset, they’re quite simply a dream. Up here, I look out over the fairytale in which I’ve found myself, and meander through the turrets, taking photographs, admiring the designs and losing my heart to this picture-perfect fantasy. As I do, he recounts beautiful histoires of timeless traditions and cultivated customs borne at this palace that trickled into society and are still practiced. 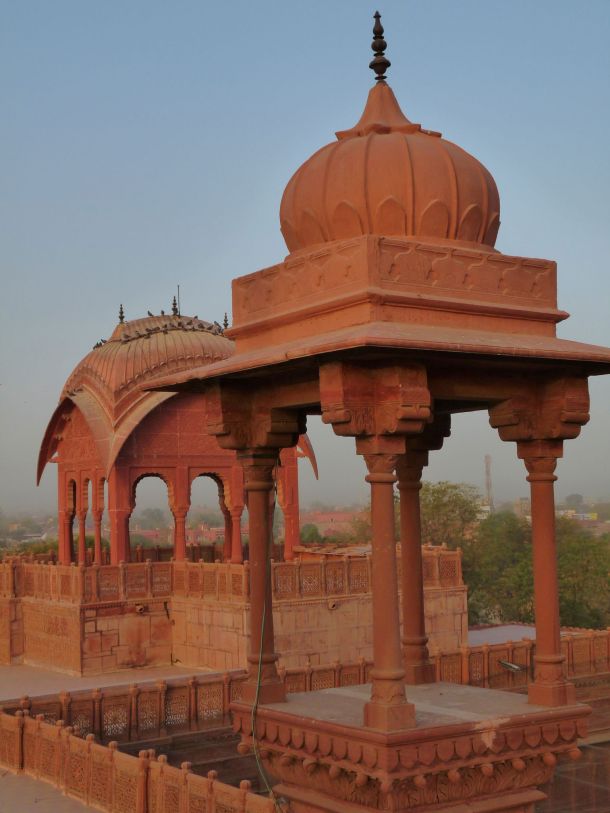 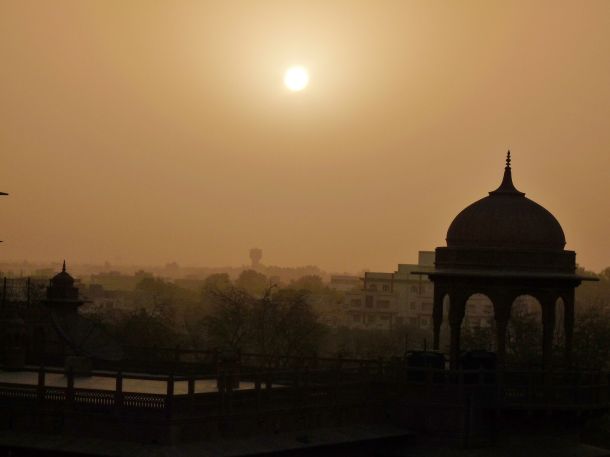 I spot a chair inside a ‘Chhatri’ and claim it, to watch the dreamy sunset. I’m brought up a fresh Mango Lassi and then left in solitude to recline. This is my hiding place, and I secretly hope that no-one else finds it when guests arrive tomorrow. But for  now, I feel every inch the Princess, in her own magnificent palace for the night. 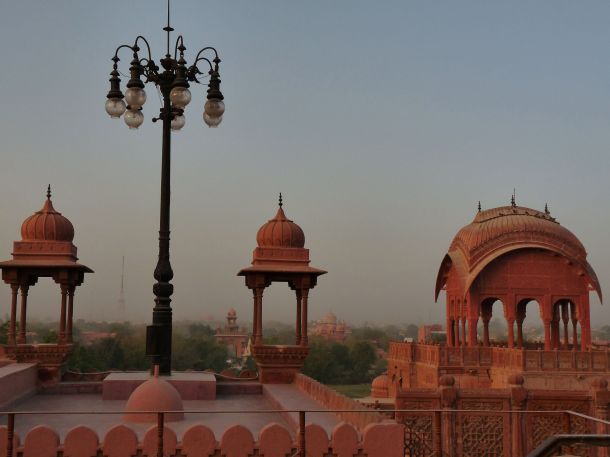 Pink sandstone Chhatri’s in which to dine, unwind and absorb breathtaking sunsets over Bikaner

SOLO GUEST AT THE ROYAL PALACE

Dinner that evening is an experience. Out of habit and a mark of respect, I change into evening dress for dinner. Being the only guest, I’m waited upon by the entire team, to which I realise I become very rapidly accustomed. The chef greets me and ensures all is to my taste. It certainly is.

A Rajasthani craft is puppeteering. Locals create large puppet dolls in traditonal Rajasthani costume and then put on a dance show with the puppet to a classical Indian harmonica. I watch the performance and donate a tip, before being encouraged to try it myself. Later, I’m serenaded by classical Indian musicians and watch a Rajasthani dance show, in which a beautifully-dressed woman paints the story of harvest through dance. It’s a memeorable evening and I savour it all to myself; the me-time that only I know about at this moment in time.

This is where I feel present and alive. Experiencing this myself is curiously liberating and slightly exciting. That’s a  new feeling to me, but one that I grow to adore during this India trip.

That night, I have to admit is slightly creepy. The Maharani suite features a ‘Jharokha’ on the second floor. Traditionally, women would oversee proceedings below from behind this intricate lattice of cut-outs, which is impossible to see through from below. So women would be safe from prying eyes and could enjoy activities in the main palace. But it’s an imposing attribute and slightly eery not imagining what lies behind. In any case, that doesn’t stop me getting a wonderful night’s sleep as soon as my head hits the pillows.

The next morning I head out early to explore Bikaner. Driving through the unforgiving Thar desert, I spot rural tribes who’ve set up home in the midst of sandy scarcity.

THE MOST BEAUTIFUL JAIN TEMPLE 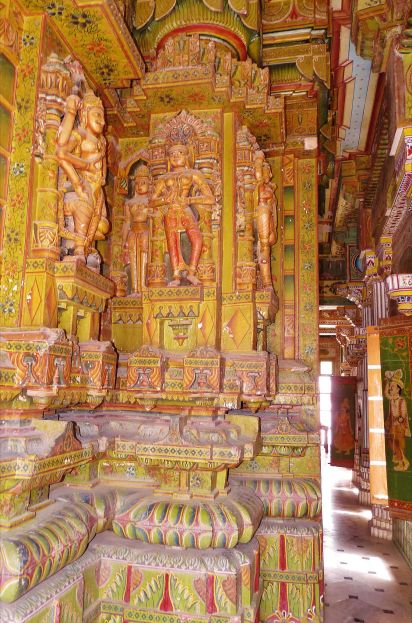 Jainism is an outpost of the Hinduism religion. It’s more recent and more rigid. Jains believe that anything that has grown out of the ground must not be eaten. This includes things like potatoes. They also believe it’s a sin to kill any living creature so they go out of their way, traditionally, not to kill a single insect or step on an ant. 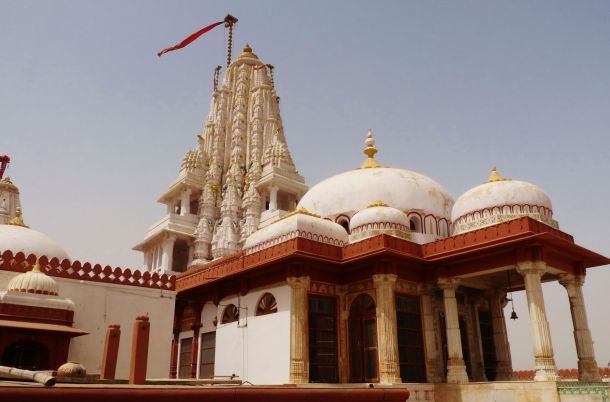 27 Jain temples can be found in Bikaner. Today I visit a protected one called Bhandasar which is said to be the most beautiful and highest. Inside, the temple is filled with stunning artwork and extends panormaic views from it’s top floor.

Each palace has a fort. Bikaner’s Fort is ‘Junagarh’. It covers a vast ground and comes with adjoining Prachina Bikaner cultural centre and museum.

As I meander throguh the fort at my own pace, my guide explains the history behind antiques, royal artefacts and adornings that belonged to the royal family. A ‘hicko’ or swing catches my attention. It’s made of fortified gold and is a royal ornament upon which any member of the royal family would sit and swing. I’m enamoured by it’s beauty.

The Kings of old were very large men. As I wander into their walk-in wardrobe at the museum, the Kings’ gowns are just swathes of luxurious fabrics; more tents than outfits!

Also striking is the level of detail and attention in each of the wall paintings. Every wall and roof is emblazoned in frescoes down to the tiniest detail. And they are a world of insight into the lives of the royal family, with depictions from art, music and dance to religion and nature.

The temple I’ve been anticipating is ‘Karni Mata’, the Temple of Rats. This is littered in rats. They scarper across the floor, hide in rat holes and rattle across your feet.

I’m slightly anxious but fascinated. In any temple in India, shoes have to be removed so it’s a good idea to bring a disposable pair of socks for this bit. As you can imagine, the floor is covered in rat droppings, which crunch under my toes as I walk. Walking in, I’m psyching myself up not to squeal or scream or jump if a rat runs over my foot. It takes a little getting used to. But it’s so surreal it doesn’t feel real. The floor is filled with them.

Temple staff cook pure ghee Indian sweets and lay out fresh milk to feed them. And with shelter in different areas, they remain. Legend had it that if you spot the white rat, luck will be with you for life! Needless to say, I don’t see it. 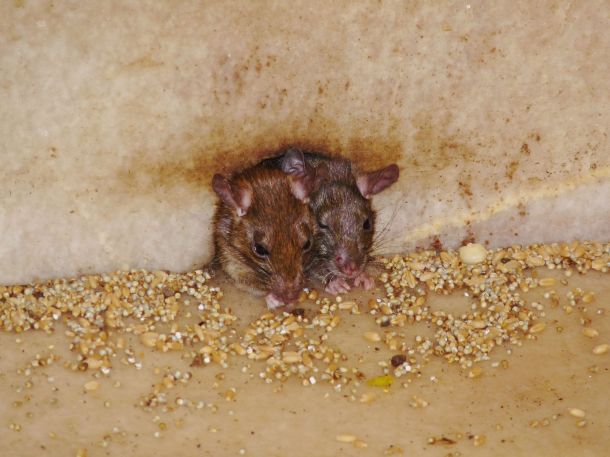 Warding off evil at Karni Mata rat temple in Bikaner

RETIRE TO MY PALACE

After a day of strenuous sightseeing in stifling heat, I am very ready to return to the lap of luxury at Laxmi Niwas.

I head straight up onto the roof and unwind for the evening.

2 thoughts on “LIVING AT THE ROYAL PALACE IN BIKANER”