By the time I land, check in at the Hotel Imperial, synonymous with the world’s royalty & dignitaries and spend a few minutes falling in love with by my very classic and elegant Suite, (and devour a box of Imperial Torte chocolates,) it’s 4pm. 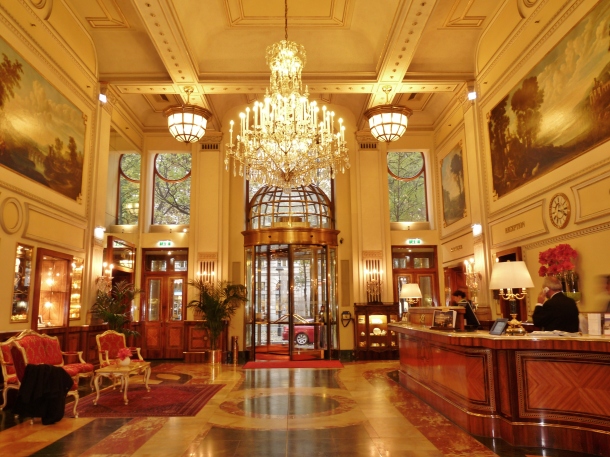 In winter, by 5pm, it gets dark in Vienna. This; my first ever solo trip, I don’t know my way around and I have no solid idea of where to go or what to see, is slightly daunting. But off I head, map in hand, wrapped up like a porcelain doll in a rustic autumnal dress, boots, coat, hat, scarf and gloves! (A girl’s gotta dress the part!)

INSIDER TIP – SEE THE CITY BY NIGHT FIRST IF YOU CAN.

It becomes quickly apparent that a night tour is the most majestic way in which to kick-start any Vienna tour. Initially, circling the Ringstrasse, which replaced a 13th Century city wall, is the ideal way to begin. You can’t really get lost as it’s a large loop that lands you back in the same spot. Most of Vienna’ s historical sights are dotted along it or stem off into side streets, in an illuminated display fanning the city like the feathers of a proud peacock.

A little trepidation accompanies my tour as I walk alone in a city I don’t know at all. I am conscious of my surroundings and safety, especially at night. But at the same time, I feel overwhelmingly liberated; like being up a grown up child on an adventure.

My quest? To loop half the Ringstrasse tonight via seeking out a particular Viennese coffee house; the first of many, no doubt! 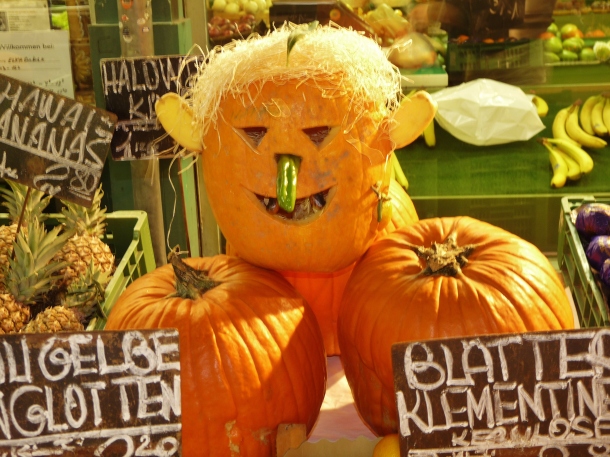 One of the first places I stumble into (strongly led by a sixth sense for food!) is Naschmarkt. A formidable fresh food market, it’s a sensory and sensual experience for any gastronomy lover. 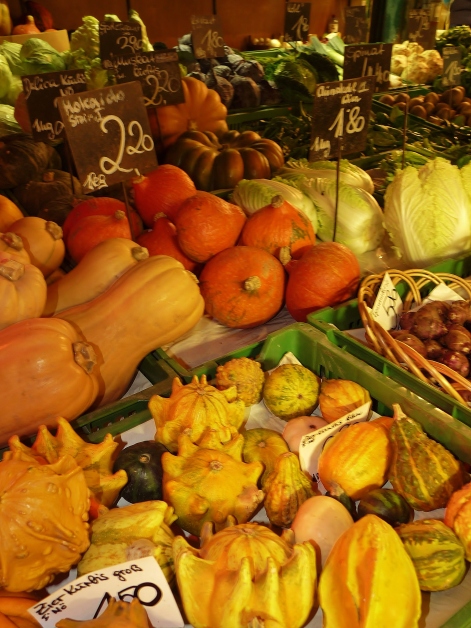 Fresh fruit & veg at huge Naschmarkt market in centre of Vienna, with restaurants, bars and every world cuisine

Fresh fruits and vegetables, all nobbly and oddly shaped, some which I can’t even identify, brightly coloured, dried fruits, every world cuisine from Turkish mezze to Thai and gourmet fish and chips. 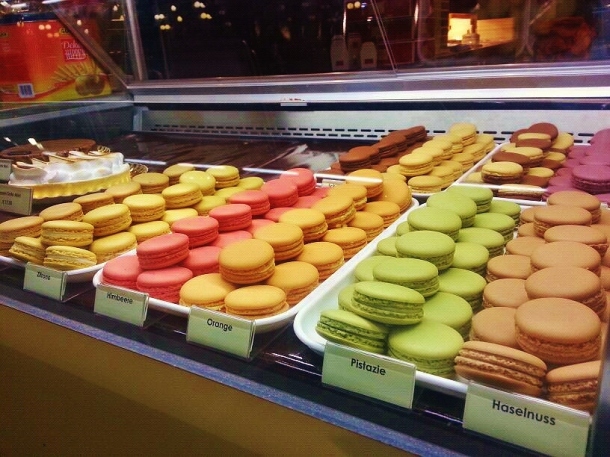 Macaroons of every flavour amongst other patisseries, cakes & desserts at Naschmarkt, market in centre of Vienna

Small quirky bars and cosy restaurants, fresh fish and meats, every type of olive, dressing and entire shops devoted to wines of the world. I nibble on a few bits as I wander through, vowing to return (as I do, several times). 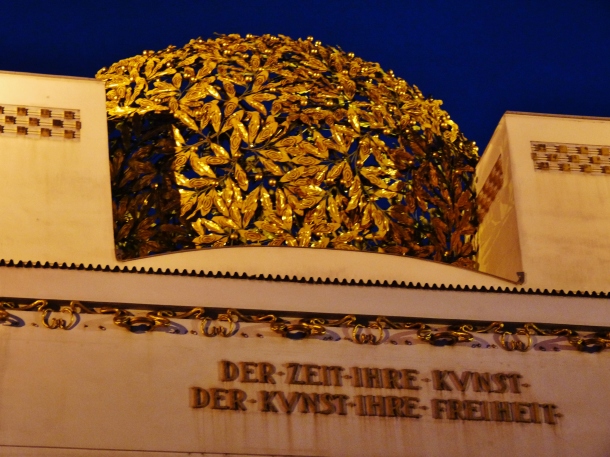 The Secession, famous for iconoclastic artists who shunned traditional art history, the French Impressionists, of which Gustav Klimt was honorary president, Vienna

From here, an intricate dome of golden leaves twinkles at me in the street lights. This marks the Secession, home to works of art by the Secessionists who were an iconoclastic group of artists from the 18th and 19th centuries. They were known for producing works of art forsaking all art history and tradition and, as such, made a name for themselves. Gustav Klimt was one of the founders.  The building is a siren; eye-catching from all around.

From here I walk towards the Museums Quartier towards the City hall building, Rathaus. Passing the iconic Kunsthistorisches Museum and Natural History Museum (both are identical except for the statues at the height of each building).

Lit up by night, both vast buildings and grounds are impressive. It’s impossible not to get carried away taking photographs. Inside, they’re so vast they could easily each justify a full day.

Parliament through the No2 ‘Streetcar’ tram, one of Vienna’s most efficient & easiest forms of public transport, Vienna

Walkingpast the Museums Quartier, I spot a brilliant photo opp. The ’streetcar’ or tram is one of the easiest and most accessible ways to get around the city. Through the Number 2, I spot a marvellous view of the grand Parliament building.

I approach Rathaus from one side. Before it, lies the pretty Rathauspark which is dewy and Autumnal in October. Vienna’s infamous Christmas markets are just setting up stall. I feel quite safe wandering through it by night to find the perfect spot, of course, for a photograph. This building is one of my favourites in Vienna. A striking Gothic façade, emblazoned in intricate carvings, spot-lit and methodically interspersed with flashes of red bouquets in every window. It’s a blissful blend of striking and beautiful. The awe-inspiring building was built in the 19th century and replaced the outgrown Old City Hall or ‘Altes Rathaus’ – worth seeing to compare the drastic difference in size and show. It reminds me of the Houses of Parliament in London, by where I live, so perhaps that’s a subconscious reason. 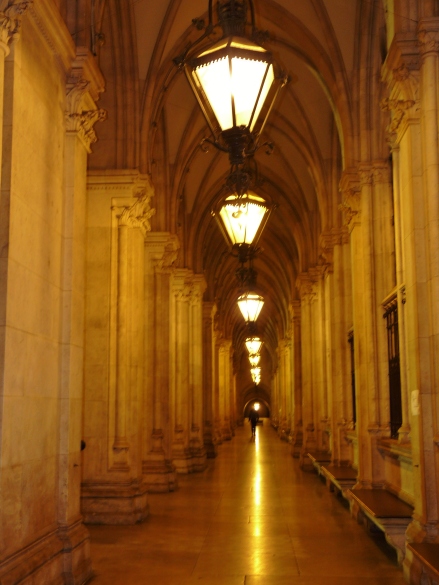 I’m in awe of the arches in the long narrow hallways of the City Hall with a row of antique lamps lighting up the pathway. Also from the front entrance, look back to a glorious view of the grand Hofburg Theatre. 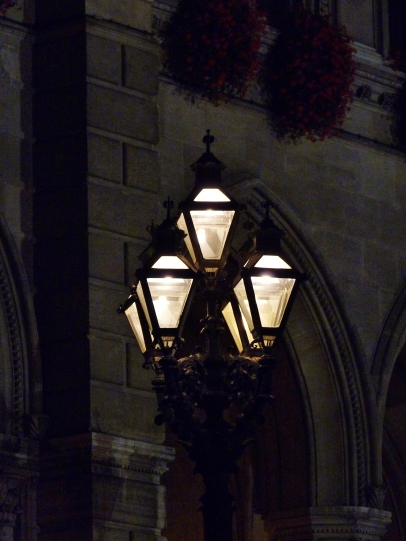 Also from here, catch glorious views towards St Stephen’s Cathedral in the distance; its towers lit up and scouring the inky black night skies.

On my way back towards the hotel, I actively seek out Café Sperl. It’s on Gumpendorfer Strasse. With such a quirky name, it’s easy to identify. And it happens to be en route (-ish).

Peering in from the bitter chill outside, it exudes a warm glow. Café Sperl is cosy with a simplistic but elegant vintage feel with crystal chandeliers. Down a long fairly dark street, this place at the end is filled with light and overflowing with steaming hot chocolates, Melange coffees and cakes. Well, it would be rude not to!

Sitting alone in a coffee house is my first personal challenge. Though in Vienna it’s the norm, travelling alone is new to me so I do feel a little shy. As I enter, I’m directed towards a huge pool table covered in newspapers from around the globe, each attached to a long wooden handle. I pick one up and take it to my seat. Remembering a friend’s tip, I order the Einspanner and a traditional Apfel strudel. The eclectic mix of people is intriguing, so much so I barely get time to look down and read past the first headline. My mind wanders to ‘coffee house literature’ as it was coined when leading writers and poets penned much of their work in Viennese coffee houses, as Karl Kraus did right here. I can hear accents from around the globe, as a healthy mix of tourists and locals frequent Café Sperl; all united in joy to be here. The entire time is such a sensory experience, there’s little time to feel alone. 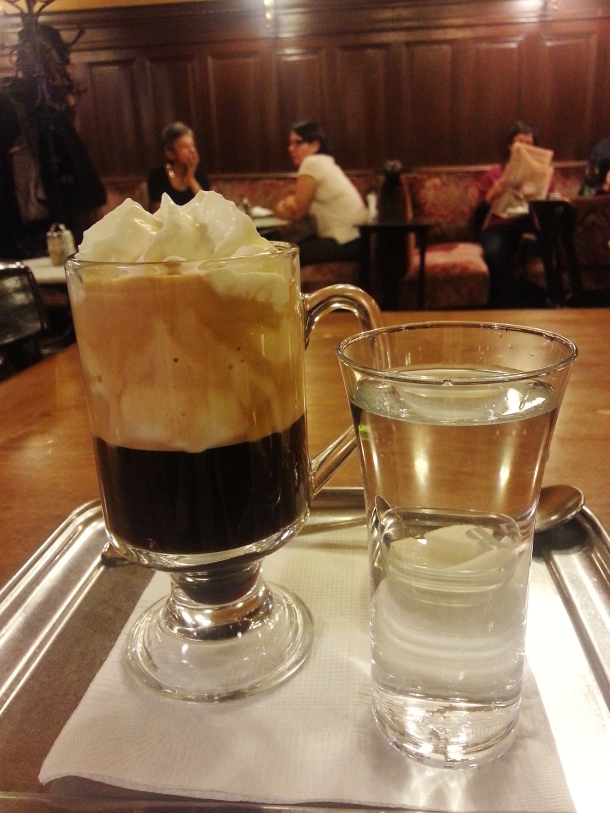 Before long, my apple strudel and Einspanner coffee have disappeared, as has the glass of water served with every hot drink in any traditional Viennese coffee house. Note to self, Einspanner is black strong Espresso underneath the mountain of cream. It’s a bit harsh for me. The cakes are now calling. After succumbing to a large piece of Torte, I accept that this Coffee House tradition may be the one major aspect around which I base all my sightseeing activities for the next week.

And thus I do, plan my sights around coffee house pit stops, visiting, comparing and eating and drinking my way around Vienna!